As all of us adapted to the pandemic, so did the Minnesota Legislature this Session. Committee hearings, meetings with members of the House and Senate, and other lobbying activities were all conducted remotely. The Legislature seemed to have improved its Zoom skills since the end of the 2020 Session, and proved that it had the bandwidth to get some things done.

And what a thing it was for the solar industry. This legislation continues Minnesota’s history of strong, effective solar policy and progress towards ambitious clean energy goals. The highlight wins for MnSEIA priorities include:

The bipartisan final vote in the Senate reflected the strong consensus that Energy Chairs Senjem and Long, Commerce Chairs Dahms and Stephenson, and the rest of the working group managed to achieve in the Commerce and Energy Omnibus. 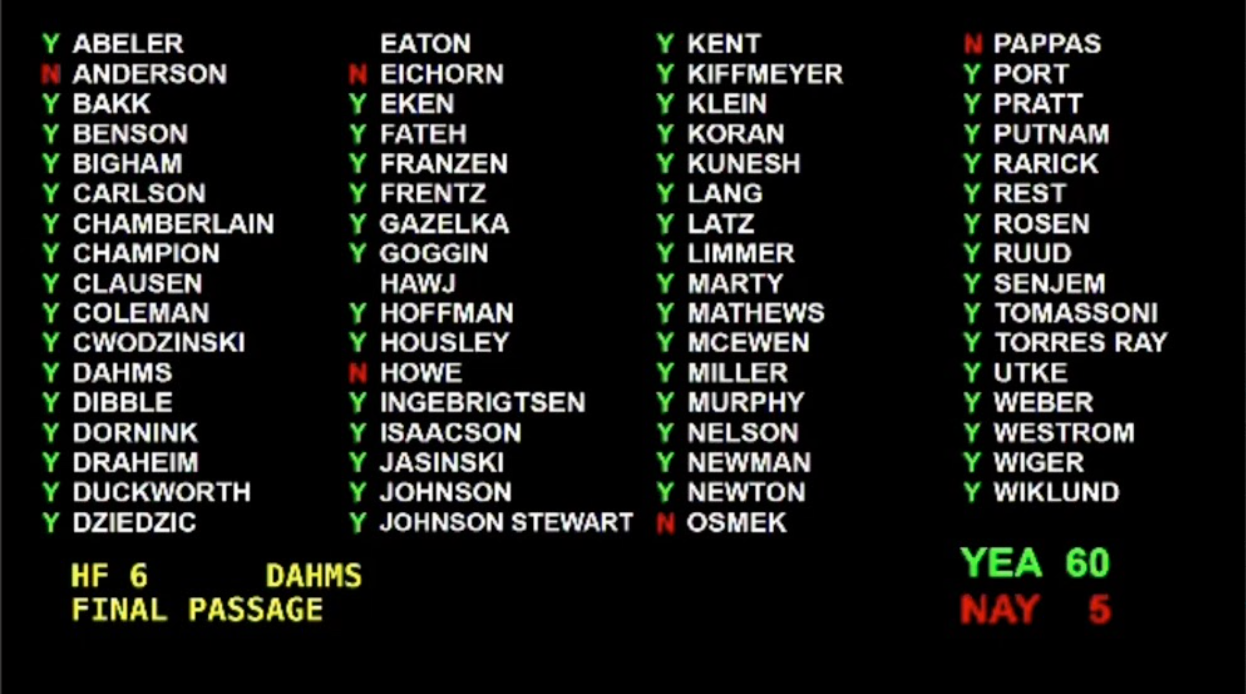 Half of the Solar for Schools and Solar for Community Colleges allocations, and all of the Solar*Rewards extension will be funded by the Renewable Development Account (RDA). Xcel Energy pays into this account each year for each cask of spent nuclear fuel stored on Prairie Island. Money in this account can only be spent on renewable energy projects in Minnesota, as directed by the State Government, and does not add to taxes.

MnSEIA’s legislative initiatives ranged far and wide this year, and all of our bills were heard at least once. Most were included in the House Climate and Energy Finance and Policy omnibus, which meant that MnSEIA’s priorities went into conference committee negotiations in a very strong position.

The Senate combined the Energy and Utilities Finance and Policy omnibus with the Commerce omnibus, and so the House followed suit.

Ultimately, this year’s regular legislative session—which was a budget year—concluded without a number of leadership priorities agreed to by respective House and Senate leadership teams. The legislature reconvened for a June special session, and in the meantime most conference committees reconvened as working groups to hammer out details in the short interim period.

MnSEIA worked hard throughout the 2021 legislative session to make Solar for Schools a reality—an initiative we've been lobbying for four years with our partners. Last session, MnSEIA fought for Solar for Schools to be included in the RDA omnibus bill at the end of Session, but given the urgency of COVID-19, solar on schools was not a high enough priority to make the final compromise.

This year, most parties had high hopes for passing a program from the get-go. Xcel, too, was keen on making the program happen. The utility also pushed for sister programs in non-Xcel territory, which is one reason Minnesota will have parallel programs in different parts of the state.

The Xcel program (or programs, since Solar for Community Colleges will be run from a separate allocation of funds) should in all likelihood work similarly to Solar*Rewards, with a performance-based-incentive, per-kWh sweetener paid to projects for 10 years. The non-Xcel programs will be administered by the Department of Commerce, and give grants to projects that meet the program criteria.

Look for both programs to go through the administrative rulemaking process this Fall, and solar installations to pop up on schools throughout the state in 2022.

MnSEIA followed up the 2019 Brightfields study bill with a bill that will open up nearly a Gigawatt (GW) of potential capacity in the coming years.

The 2021 Commerce and Energy Omnibus included the next step in Brightfields for Minnesota. The legislation opens the door for a pilot project on the Anoka-Ramsey closed landfill to prove the concept with a 5-6 MW installation for Connexus Energy.

The legislation does 3 crucial things to make brightfields a reality: 1) it pays off the $100,000 remaining on the bond associated with that landfill, legally freeing it for other uses; 2) it amends the Landfill Cleanup Act (LCA) to allow for solar as a beneficial reuse of the land; 3) it commissions a Solar on Closed Landfills fund, which is paid into by the land leases on brightfield projects, and will be used to pay off bonds associated with other landfills to clear the way for more brightfields—creating a snowball effect.
The next step in brightfields will open a huge new market niche for solar in Minnesota. Learn more about our work with brightfields here.

MnSEIA also worked on comprehensive legislation that would provide protections and establish clear rights for all solar owners and those interested in going solar. MnSEIA has recognized the following problems and worked to resolve them through legislation.

This bill was introduced in two forms in 2021, in both the House and the Senate. The bill had several hearings to amend it into a shape that brought stakeholders, like the HOA lobby, to “peace in the valley” by the end of session. MnSEIA’s hard work on this bill definitely brought the issue more into the limelight, with several articles highlighting the need for a legislative fix for solar-going homeowners in HOAs (Read Energy News Network's article here and MinnPost's article here.)

While it did not make the final cut in the closed-door negotiations for the omnibus bill, we have reason to believe that it almost got across the finish line.

The current Small Power Production Statute has language in it around Avoided Cost pricing for Renewable Resources. The way it is written forces utilities to pay a price commensurate with the least cost renewable energy resource they have ever received a bid for. Moreover, the language that was once meant to encourage renewable development is now standing in its way. In a recent PUC docket there were 12 different ways put forward to calculate the 5MW wind/solar hybrid’s Avoided Cost. This regulatory confusion can be easily overcome by removing language from Minn. Stat. 216B.164, and ensuring that all qualifying facilities in Minnesota are subject to the same pricing mechanisms.

This is a pretty complicated concept that some legislators have had trouble understanding. Representative Patty Acomb did a fantastic job grappling with the subject and authoring the bill, which was included in the House Energy and Climate Finance and Policy omnibus, but not in the final product negotiated between the House and Senate.

In an effort to redirect Community Solar Garden (CSG) development toward residential subscribers—as many had anticipated in the original 2013 legislation—a few stakeholders and members have worked with MnSEIA to advance a designation for CSGs that meet certain requirements. This type of project would need to meet certain transparency, low-income, and percentage of residential subscriptions criteria in order to gain access to more advantageous rates and on-bill repayment.

This bill, like the other CSG reform bills, got some great traction in both the House and Senate, but faced a roadblock in the form of a desired larger CSG deal with Xcel. Negotiations for this and other CSG reforms will be ongoing among stakeholders in the Fall of 2021.

A number of benefits will flow from removing the requirement that subscribers to a given CSG reside in the same or contiguous county. First, subscribers will have many more options, so that certain counties are not placed at an arbitrary geographic disadvantage. Second, developers will also have more viable sites available, which will ease pressure on substation space and on host communities. Third, Greater Minnesota will benefit with economic development from gardens built outside the Metro area, and from bringing savings to subscribers across Xcel territory. Representative Acomb introduced Bill HF653, which changes the contiguous county rule so that community solar gardens are not unfairly disadvantaged.

This bill, like the other CSG reform bills, got some great traction in both the House and Senate, but faced a roadblock in the form of a desired larger CSG deal with Xcel. Negotiations for this and other CSG reforms will be ongoing among stakeholders in the Fall of 2021.

Utilities are not incentivized enough to support the expansion of distributed generation, leading to situations where customers are forced to pay high interconnection fees. MnSEIA worked to create incentives for utilities and customers and push for favorable policies to promote the growth of solar in Minnesota. Distributed generation enhances a utility’s ability to ensure peak demand is met reliably and efficiently. Customers reduce their overall demand by being supplied with on-site generation and will only draw from the grid what their system doesn’t cover.

This bill went through a few changes during Session, notably in an attempt to target areas like Northfield, where the grid is underbuilt in relation to the amount of DG on it. It became a priority for leaders in the House, especially its author, Representative Lippert. While it was included in the House Energy omnibus, it did not survive negotiations with the Senate working group.

Our legislative push spotlighted the issue of grid congestion, which remains both a legislative and regulatory priority for MnSEIA.

Energy Storage is an excellent way of capturing even more benefits from your solar array. Additionally, storage, when combined with solar, has the ability to drastically reduce peak demand loads for large power consumers such as commercial and industrial customers. However, customers located outside of Xcel’s service territory are being overcharged for spot demand increases and are not receiving adequate compensation for the benefits that they bring to the grid. MnSEIA worked towards policy that makes these utilities work out a plan with the Public Utilities Commission that would ensure customers with solar and storage receive fair compensation for their contributions to the grid, and that they are not being over-billed for their reduced demand.

Our work on this bill, which included stakeholders from around Minnesota and of all political persuasions, highlighted the issue for Ottertail and Minnesota Power—as well as legislators in both chambers. It was included in the House Energy omnibus, but did not make the final cut in negotiations with the Senate.

Federal and State incentives for solar have been extremely effective in increasing the amount of solar generation on the grid. Incentive programs like the Federal Investment Tax Credit and State Solar Tax Credits provide individuals and businesses alike with a cost recovery mechanism that encourages solar development. Neighbor states, such as Iowa and Wisconsin, have established state solar tax credits and are seeing their benefits in developing more solar generation. With the renewed focus on renewable generation development in Minnesota, the time has never been better to provide additional incentives to encourage its growth.

MnSEIA’s goal in pushing for this bill was to highlight the need for solar incentives in Greater Minnesota, where residential incentive programs like Solar*Rewards typically don’t exist. Hearings in both the House and Senate drew attention to the issue, and jumpstarted conversations about statewide incentive programs that will bring solar to all. 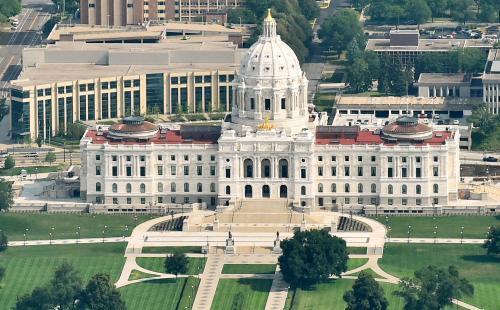 SEE WHAT WE ACCOMPLISHED IN 2020 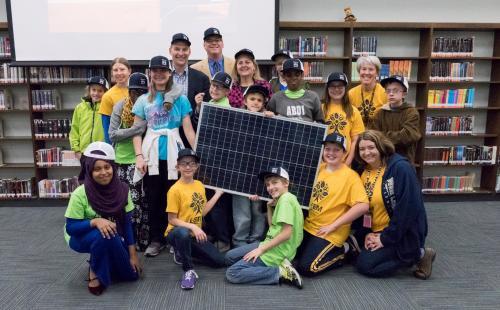 Learn more about the solar on schools program 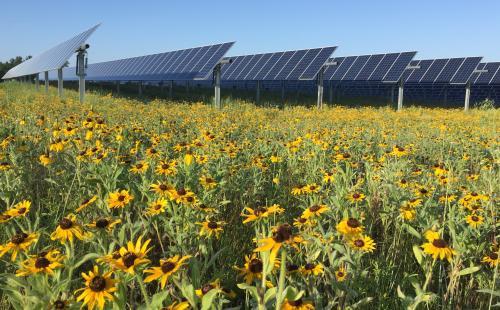 Read more on the solar on Brightfields bill